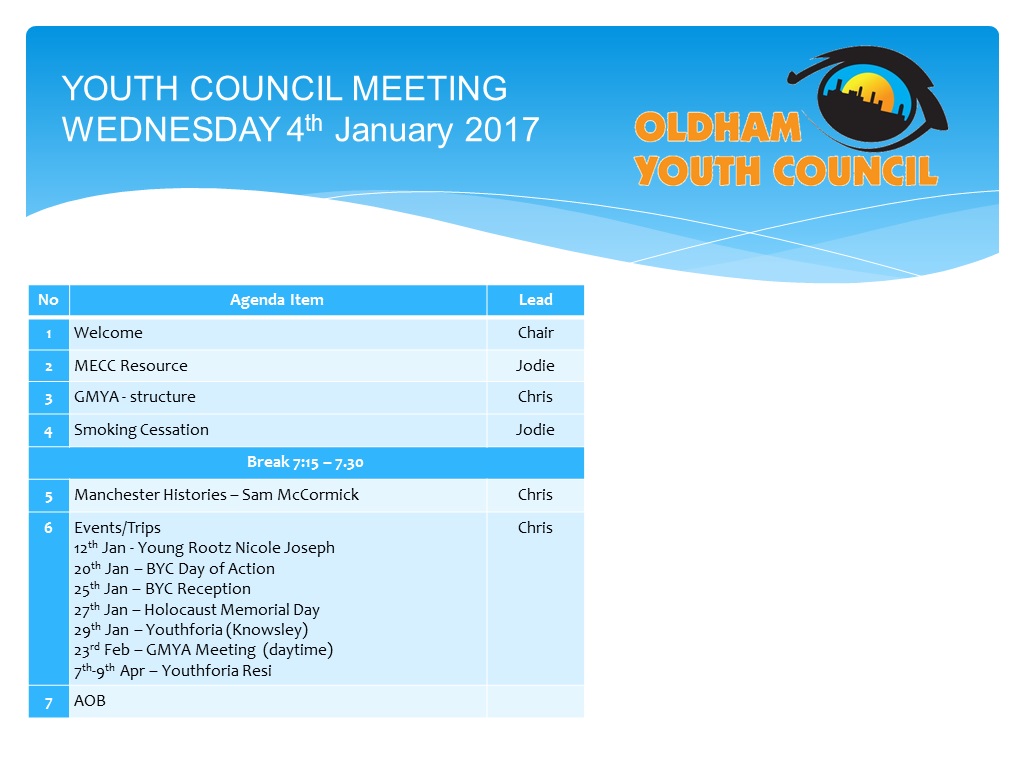 The youth council told us their good news to start the new year off.

Jade and Samah fed back on the event that they attended at OXFAM related to the formation of the GMYA assembly. They talked about how they discussed the issues facing young people in Manchester and how they drafted questions to pose to the mayoral candidates as well as what they learnt from the speakers about campaigning tips etcetera.

Chris then headed out the discussed structure from youth focus from GMYA for the youth council to look through.

Chris then asked how our elected representatives should be elected in Oldham. It was suggested that the reps should hold the post for just one year (since the GMYA is meant to be reviewed after a year). It was also suggested that the elections are done like MYPMember of Youth Parliament – The Member of the Youth Parliament is elected to represent the LA on a national level. and DMYPDeputy Member of Youth Parliament – The Deputy Member of Youth Parliament is the first year of a two year role, which allows the elected members to learn about the role and step in for the MYP when needed. To be elected as DMYP, you have to be within the age bracket of 11-18, due to this role linking in with the BYC.. Top two voted will be the representatives and the remaining candidates will be asked whether they want to run for deputy. Speeches will be done and the Youth council will vote. Samah, Jess, Alex and jade put their hand forwards for the role of elected GMYA. The elections will be on the first wednesday of february.

Jodie told the youth council about a heath scrutiny meeting from which the mayor is having a healthy living campaign.It will focus on three things: oral decay in children, health checks and mental health with particular  focus on mental health of armed forces veterans. At the meeting the youth mayor and the youth council would be invited to tackle smoking tobacco shisha etcetera with the council. The youth council were then asked whether they wanted to be involved in the anti-smoking agenda.

Chris told the youth council that we were offered an opportunity to get involved in a project exploring the recent history of  greater manchester. There will be two sides  a radical thinking side and a history of where you come from side. This will be for a massive exhibition . the idea is that we do work at the youth council as part of the discrimination campaign and trips to the archive area – understanding where people come from to reduce discrimination.

Everybody is eligible to attend. It will be on a Thursday evening to photoshop pictures.

MYP’s will be meeting MP’s to discuss the campaigns voted for at the house of commons.- votes at 16 and Curriculum for life

We have been invited to a reception down in London – the MYP’s will be attending. Our hard work was recognised and this is being celebrated.

27th Jan – HolocaustThe Holocaust was the mass murder of six million Jews and millions of other people leading up to, and during, World War II. The killings took place in Europe between 1933 and 1945. They were organised by the German Nazi party which was led by Adolf Hitler. memorial

This will be an event at a Newman school and details will be sent out by Chris.

An organisation in which youth councillors from the North West meet up and work on campaigns and training. ( knowsley)

This will be on a sunday. Chris took names in for that day.

Update: So far three schools have booked on – Newman, Radcliffe and saddle worth.

Amber and Samah have so far said they can attend this meeting.

An organisation in which youth councillors from the North West meet up and work on campaigns and training. ResidentialA trip with an overnight stay

Chris took in the names of those who expressed interest in attending.

DMYPDeputy Member of Youth Parliament – The Deputy Member of Youth Parliament is the first year of a two year role, which allows the elected members to learn about the role and step in for the MYP when needed. To be elected as DMYP, you have to be within the age bracket of 11-18, due to this role linking in with the BYC. elections – Chris said that they will be on the last week of january – January 18th.

Andrew said that the local tram prices going up is a concern. Chris suggested that the youth council should hold off on that until the GM mayor is elected. We could however put forward a motion to the full council about it- this will be in february. Research will be done into the price increase in transport and we will speak to someone in the policy team and then start to draft a full motion. The youth council were all in favour.

26th Jan – Tell MOMA is organising a conference 9-1:00 with a Q&A session and special guests. Marouf will send a link to tickets in the Facebook group.