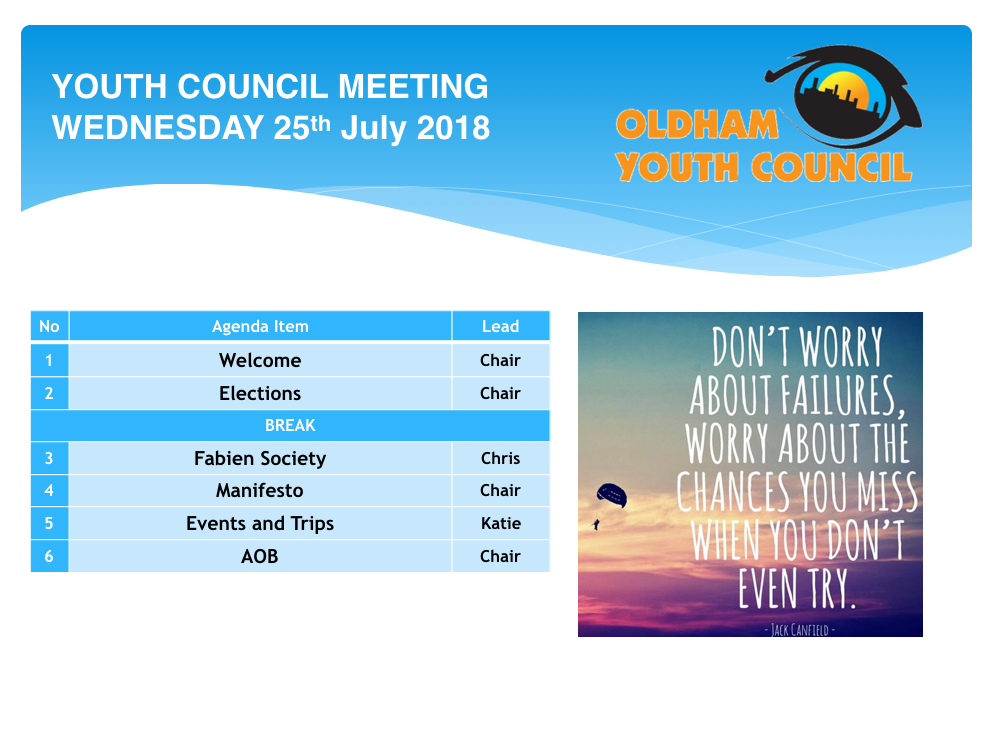 This meeting had the Officer elections for the next 12 months. As from decided from the previous meeting (11/07/18) the roles that are up in this election are Communications Officer, Events and Outreach Officer, Two Campaigns Officers and Well-being officer. Due to the right amount of candidates running for some roles, Liam H. was unanimously elected as Communications Officer and Megan B. and Hfsa F. as the Two Campaigns Officers.

After some great speeches, voting occurred. After the vote, it was revealed that the youth councillors of OYC

Oldham Youth Council More elected Afsana K. as their well-being Officer and Katie R. as their Events and Outreach Officer for the next twelve months.

Jim MacMahon (MPMember of Parliament – A member of parliament is an elected member which represents a constituency views and concerns to the Government and in Parliament. More for Oldham West and Royton) is writing a chapter for an article on behalf of the Fabian Society regarding Votes @ 16. With OYCs heavy involvement with the Votes @ 16 campaign, Jim asked OYC

Chris is using this information to piece together a paragraph for the article on behalf of the Youth Councillors.

Oldham Youth Council More is going to have a manifesto. Youth Councillors were given a task in tables to write about different sections of the manifesto, what should be in sections. This is what was created by the groups.

Oldham Youth Council More opposes discrimination in all forms… There has been a lot of campaigning despite all the campaigns we feel that discrimination is an ongoing issue for young people in Oldham and in the wider communities of the UK. We believe it is our duty to educate all people about this and we as a Youth Council believe this also encompasses important issues such as Bullying and we as a YC will always protest and fight for these issues to be extinct from our society.

The Oldham Youth Council believe that Curriculum for Life should be delivered in a high quality, appropriate and meaningful manner.

These issues should include ensuring that work experience is meaningful, it is clear how confidentiality works within the health service, education on sexual and mental health as well as how to book appointments is provided. As well as this young people should be thought how to vote as well as other aspects on political education such as understanding key party beliefs. Life skills such as CV writing, what to do and how to act in interviews as well as money skills and how to manage money whilst shopping and budgeting is done responsibility and it is clearly understood how to pay taxes, loans and mortgages should be taught meaningfully. Key social skills such as teamwork should be installed from and early age.

A lot of young people feel the need to diet so it should be taught how to do this safely and healthily, making sure that a balanced diet is still achieved.

Issues usually start before the age of 14. As a Youth Council, we want to raise awareness to allow people to understand mental health problems and breaking down stereotypes. We aim to do this and to prevent problems by encouraging other young people to talk but also to signpost to people in need to the services available such as KOOTH.

Events and Trip dates were given to youth councillors within the meeting.

Khadija A. wants to do a colour war on the Super Resi for a new banner for the Facebook Group and had asked if people wanted to be involved.

Youth Councillors going to the Political Summer School are being involved in a planning meeting for an Annie Kenny statue. They are going to be involved what text would be put on the box that Annie is standing on, text that is written on behalf of OYC

Chris mentioned about the temperature checks a couple meetings ago, explaining what has happened with then due to some personal messages and messages about forming cliques, explaining that these cliques that are seen would liquidise in the super Resi, as youth councillors get more chances to get to know each other.