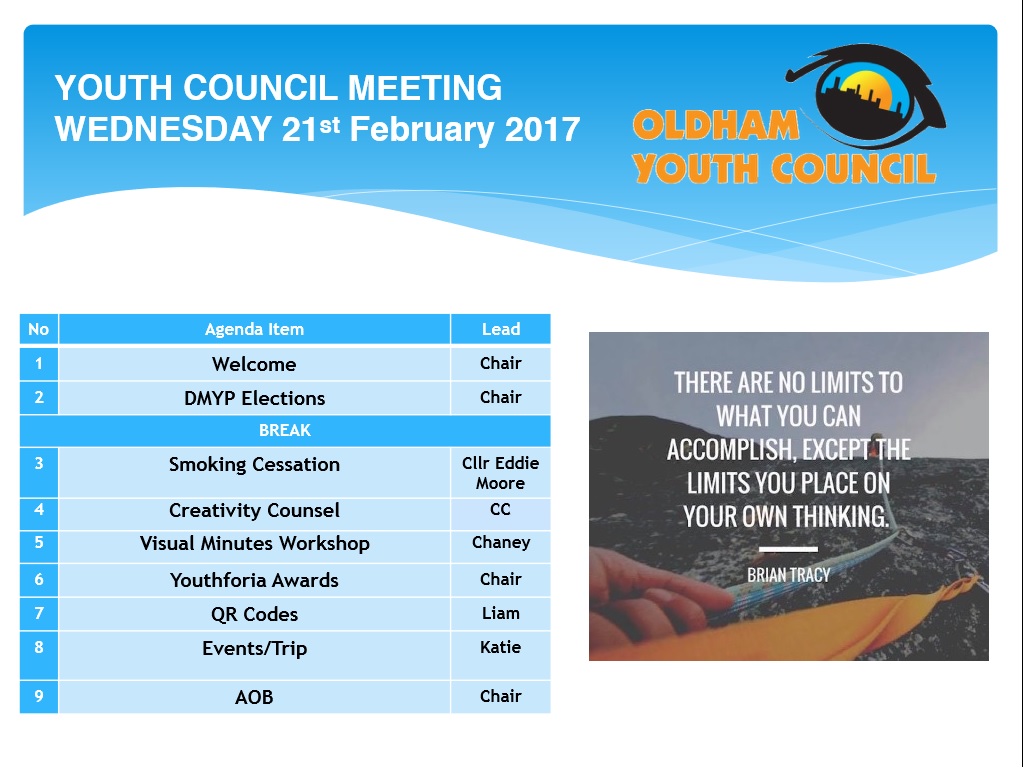 Tonight held the DMYPDeputy Member of Youth Parliament – The Deputy Member of Youth Parliament is the first year of a two year role, which allows the elected members to learn about the role and step in for the MYP when needed. To be elected as DMYP, you have to be within the age bracket of 11-18, due to this role linking in with the BYC. elections, as our DMYPs move up to MYPs and the MYPs, after an amazing year of work, step down. Three candidates stood in the election and after great speeches and delving questions, the OYC

Oldham Youth Council elected Liam H and Isabelle A as their next DMYPs, which becomes official 1st March 2018.

Councillor Eddie Moore came to the Youth Council about the problems in Oldham with smoking, and especially vaping. Many young people aren’t turning to smoking anymore, but are in hailing its “Healthy” counterpart of vaping. Eddie used his time to consult with the Youth Council and allow the Youth Council to ask him questions. Throughout his time slot, Jodie, Head of Youth Service in Oldham, came up with the idea to use Smoking Cessation as OYCs next motion to full CouncilOYC have constitutional rights to ask Council to make changes in Oldham.  They do this formally by attending a full council meeting and putting a motion to full council., which was unanimously agreed by members at the meeting. Members of the Youth Council who wanted to help were: Roshni P, Sarah N, Andrew S, Will B, Jasmine R, Shariq A, Nathan W, Jess W, Samah K.

Chaney asked if anyone would be interested in a Visual Minutes Workshop, with an example of visual minutes shown below.

Samah showed the YC the Youthforia

An organisation in which youth councillors from the North West meet up and work on campaigns and training. awards for this year, and urged everyone to nominate people for the different categories.

Liam asked people to test QR codes which will be used in the future and for new Youth Councillors when they come in April.

Trip dates and reminders were given out.