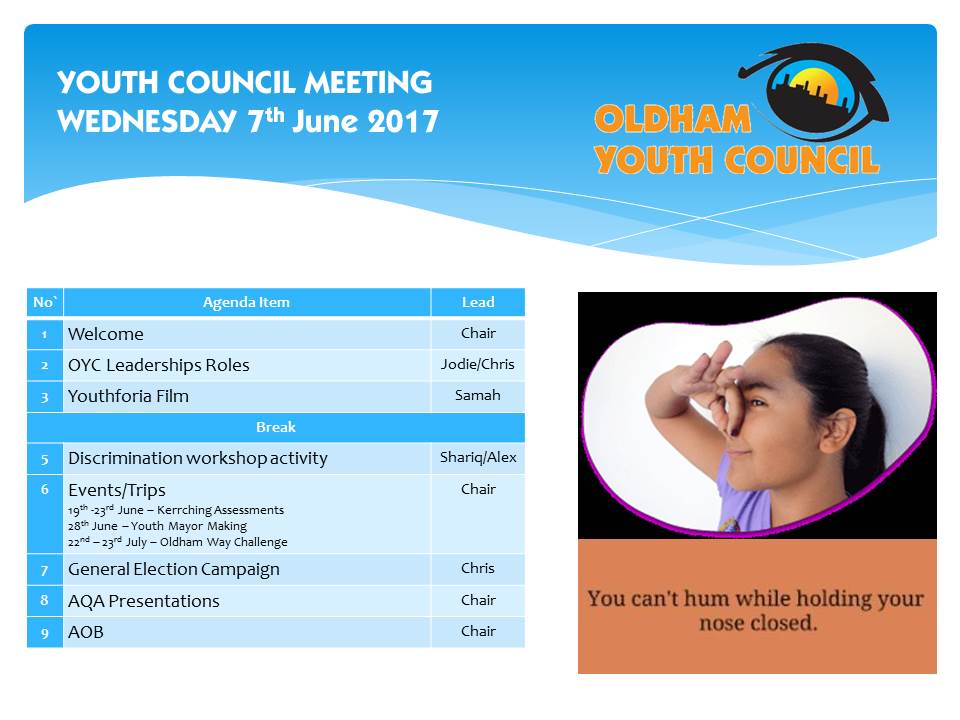 Amber started the meeting with an ice breaker.

It was brought before the Youth Council that the leadership roles were being taken by the same Youth Councillors and that this created 2 problems.  Firstly that the limited numbers of roles are not being fairly distributed across the members.  It was discussed that while everyone had been fairly elected into the roles it seemed to be the same people winning the votes and that this gave them more influence over the Youth Council.  Secondly that electing the same young person into more than role gave that person too much to do stretching them to the limit, usually at a time when GCSE and A-level exams are taking place.  As well as taking a toll on the person in the roles it may also mean that both roles are not completed fully.

The number and types of roles were discussed along with whether or not a Youth Councillor should be able to hold more than one of each of these roles.  It was decided that more roles should be brought forward to allow more YCllrs to take on responsibilities.  To aid the changes to these roles it was also discussed rearranging the election dates.

With numbers at this meeting being low due to the exam period these discussions will be taken to the next meeting.  A proposal will be put forward for the Youth Council to vote on and roles & responsibilities for each role will be decided.

An organisation in which youth councillors from the North West meet up and work on campaigns and training. on the 24th.  The YCllrs voted to go with the idea which will be filmed within the next 2 weeks.

Due to over running with the leadership agenda item and Shariq having sent apologies this agenda item was postponed to the next meeting.

Chris went through the upcoming events:

19th and 22nd June Kerrching Assessments – All youth councillors were reminded that Kerrching application assessments will be taking place w/c 19th June and everyone available needs to come along.

28th June Youth Mayor Making – All youth councillors are expected to attend Youth Mayor making on Wednesday 28th June and need to be in Council Chambers by 5:45pm.

22nd July Oldham Way Challenge – Just to let YCllrs know that they will be informed who has been successful in attending this event.

YCllrs came up with a day long social media campaign to remind young people to vote. Tweets was produced that would be scheduled to go out through the Youth Council and Youth Mayor accounts every hour on the hour from 7am till 10pm.

No certificates to present to the YCllrs