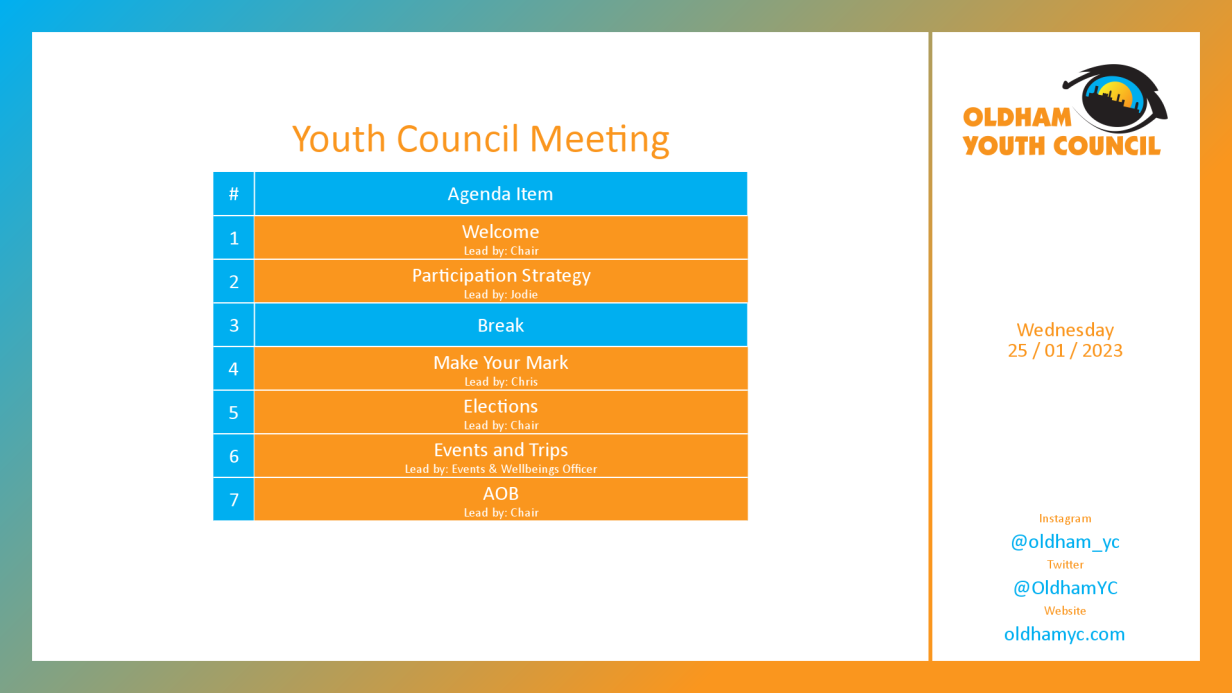 Jodie (Head of Youth Service) was tasked by Oldham Council to write an Oldham Participation Framework for Children and Young People. It will be used to determine how all organisations working with children participation, and is written for professionals.
Jodie asked Oldham Youth Council to help influence the framework, so our opinions are conveyed. Parts included how we should define “participation”, and what it means to us, why we should have it, and what differences does it make hence why adults should listen.
Group activities were held for young people to discuss a drafted document on the benefit of participation, which discussed what the decision makers are guided to do, and why it is a benefit to young people e.g. democratic, better services, indirectly means young people learn.
Youth councillors came into groups again to discuss the part of the framework regarding the principles, which says what should be expected in Oldham’s participation practices, which includes being transparent and non-discriminatory.
After the break, Youth Councillors were asked to try and adapt the old Active Involvement Charter (published over a decade ago) to be more relevant to us now, mostly being a design change but with some specific points being queried.
After this, Jodie presented us with the objectives she put on the framework and asked for issues with them.

A Nationwide campaign, run by UK Youth parliament, that gathers information on what is important to the youth of the United Kingdom.

Youth Councillors were sent an email to vote on the topics. Youth councillors are requested to read their emails and respond to the Google Form.

Penelope and Aaliyah went to the IAG, and it came up that there were no translation services within Oldham Council. They therefore proposed that, due to the lack of language understanding in social services, such as the police, was not good. Hence, they proposed we as Oldham Youth Council deliver a motion to Oldham Council on funding translation services in-house (rather than a third party being hired for certain projects) so there is some equality. Additionally, in education for example refugees from Ukraine had a lack of understanding when they came to the UK, especially young people, for example in education.

Most youth councillors favoured this. The motion will most likely happen all the way in July 2023.

Isaac mentioned about phones in meetings. Youth councillors are requested to not use their phones during meetings, and to step out if they need to send an essential message, to avoid misunderstanding. This is to show respect to the person presenting and to make the meeting run more efficiently. Additionally, youth councillors are requested to not use the microphones unless they need to speak, as it may be seen as disrespectful, and is interruptive to the meeting. Andrew added that it is not quite accessible to members with certain disabilities when people mess with the microphones, since it is harder to understand what the main speaker is saying.