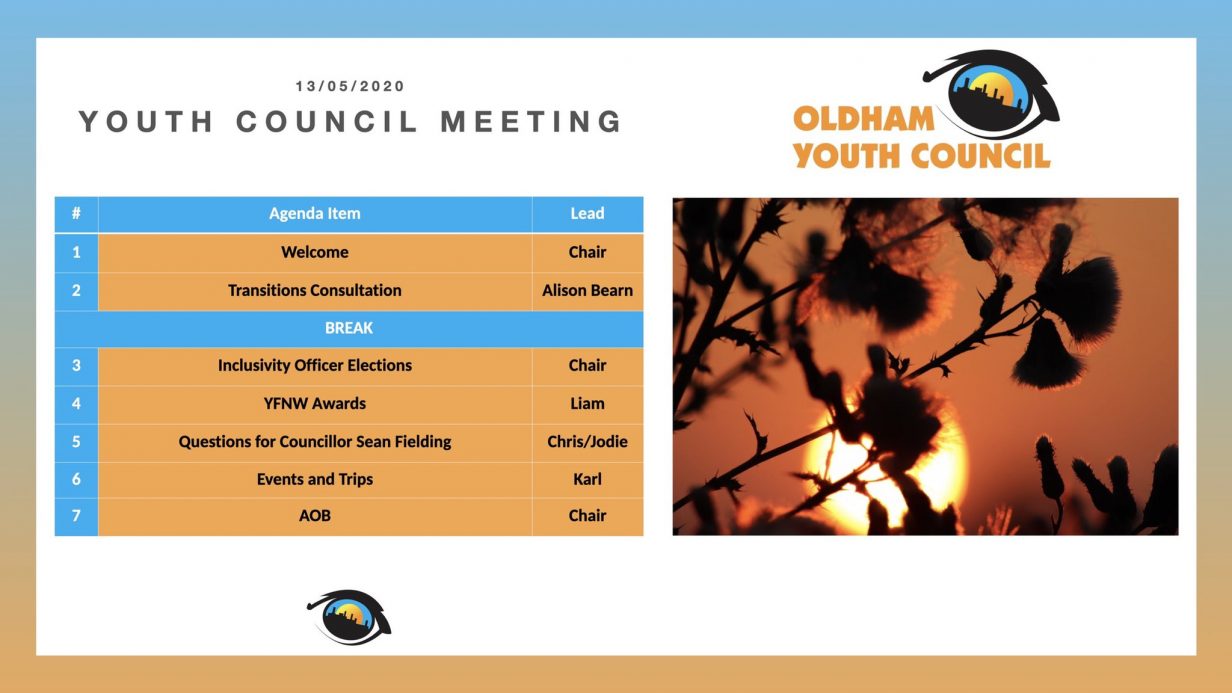 To start of this meeting, Youth Councillors were asked to make a rune based on these three questions.

Youth Councillors created a small image in response to these questions, and then combined them to create a rune, representing their lockdown experience.

Alison Bearn, Educational Psychologist in Oldham, has come into the meeting today to discuss educational transition between different levels/establishments. The aim of the consultationConsultation is when members of an organisation gather information/feedback from members of the public or group on a project or scheme. is to see how young people will be impacted by COVID-19, in the short and long term future. This is to help with research into how schools can help the transition of pupils through different educational establishments when returning to education in September.

Following unanimous acceptance in a previous meeting, the Youth Council went ahead with the Inclusivity Elections. With three candidates, Arren M-K., Tora D., and Zoe C., each candidate were given one and a half minutes to put forward their reasoning to why they should be elected into the role, and what they could do within the role, especially due to the role being a new addition to the list.

Oldham Youth Council as the new Inclusivity Officer. Due to the election taking place outside of the Officer Election period, Zoe C. is to hold the role until Officer Elections in August 2021.

Liam H., who currently sits as the Greater Manchester North Rep on the Youthforia

An organisation in which youth councillors from the North West meet up and work on campaigns and training. Steering GroupA group that manages (steers) projects and work done for an organisation. One example is Youthforia NW’s Steering Group, which plan all the events occurring at a Youthforia NW Meeting., talked about the upcoming nominations for the YouthFocus Awards, aiming to celebrate the people involved in youth voice, past and present, and to celebrate the work to come. Youth Councillors have the chance to nominate people within the world of youth work to receive the award, which will be given out at the YFNW Celebration Evening.

At the next Youth Council meeting, we will be having a Question and Answer session with the Leader of Oldham Council, Sean Fielding, allowing a two way discussion between both parties. Youth Councillors were given the chance to put forward questions at the meeting, and were given a deadline to which they need to submit them to a staff member.

Events Officer Karl H. gave an update on the different activities Youth Councillors can get involved with during lockdown.