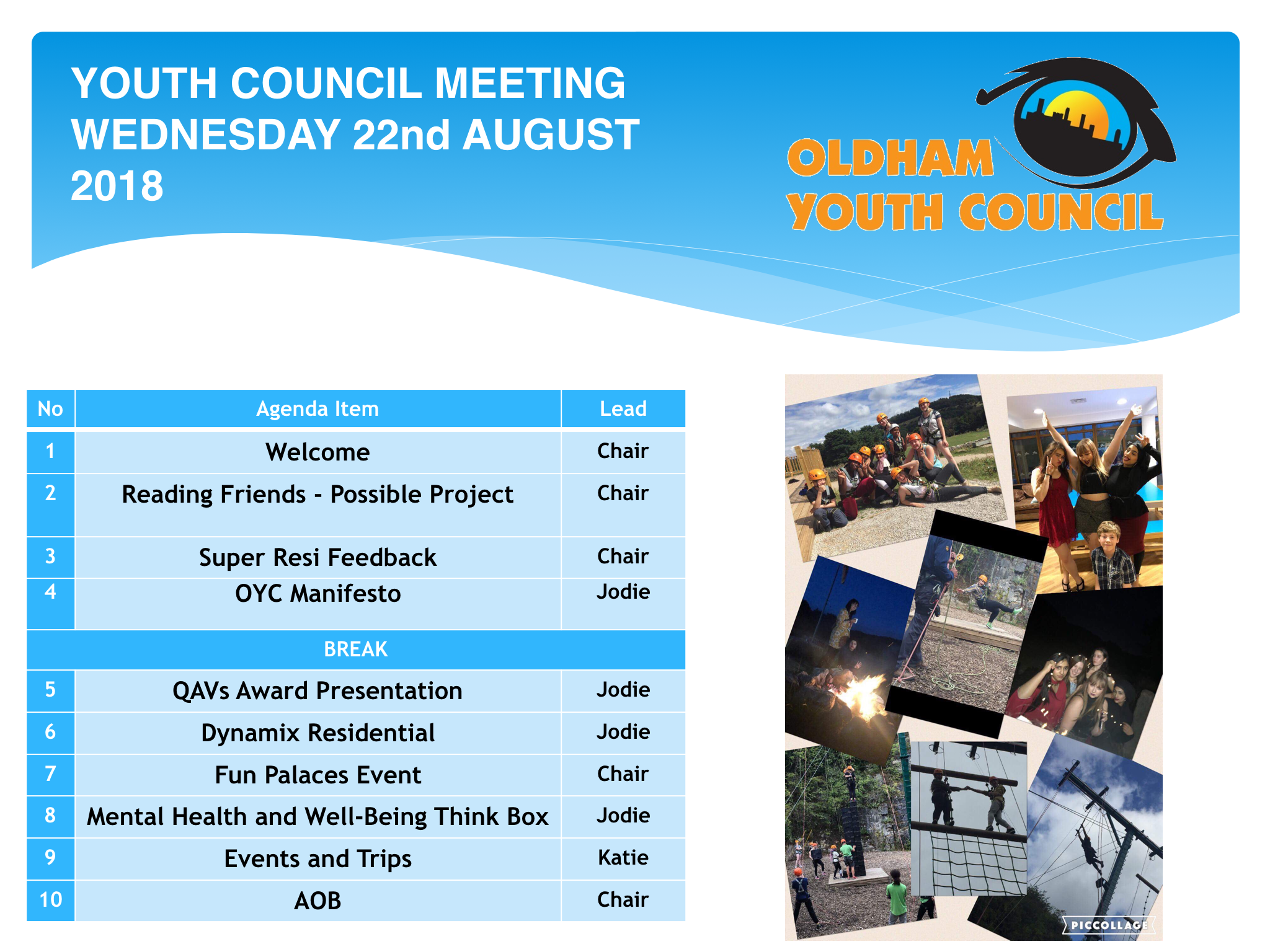 Chris has been contacted by Oldham Library about the Reading Friends project. Aimed at helping lonely and isolated old people, the project aims to help stop loneliness felt by elderly people. Doing activities such as crafts, dementia friendly cinema and singing for the brain, this pilot project wants the youth council to get involved, taking charge in some of the activities. These activities would allow intergenerational work to occur by involving schools, and allow stories to be shared between generations. After a discussion with Jodie with member is OYC

Oldham Youth Council, it is wanted to be followed up.

The Super Resi that occurred on the 13-15th August, which had members of all four groups under the Oldham Youth Voice Family brought together in different activities and workshops. This agenda item allowed more feedback to come from members of OYC

Oldham Youth Council and to share their experiences with Youth Councillors who weren’t able to attend the Super Resi. One idea mentioned is to keep the conflict resolution ongoing, as it did help with some issues that may be in between people.

It was voted in the meeting if the OYC

Oldham Youth Council should incorporate the CICC and BB into the manifesto as forums that make up part of the Oldham Youth Voice Family, and a unanimous vote passed this statement.

Following collective work from a few meeting prior, a new draft with all of the sections of collectively written paragraph connecting to the issues that OYC

Oldham Youth Council stand for. Splitting into two groups, discussions occurred about the content of the paragraphs, if more information on why we stand for is needed and if some information needs to be removed.

One key issue that was brought up was specific information is needed. The paragraphs have a lot of general information about what it means by OYC

Oldham Youth Council standing on a certain situation, but their is a lack on specifics that would explain why and would show more care and empathy into the sections of the manifesto.

One other issue that has been brought up is repetition,

The Dynamix ResidentialA trip with an overnight stay that is happening 28th – 1st September is asking for more volunteers aged 13 – 16.

Events and Trips were given out to Youth Councillors at the Meeting.

A Nationwide campaign, run by UK Youth parliament, that gathers information on what is important to the youth of the United Kingdom. has now been released by BYC