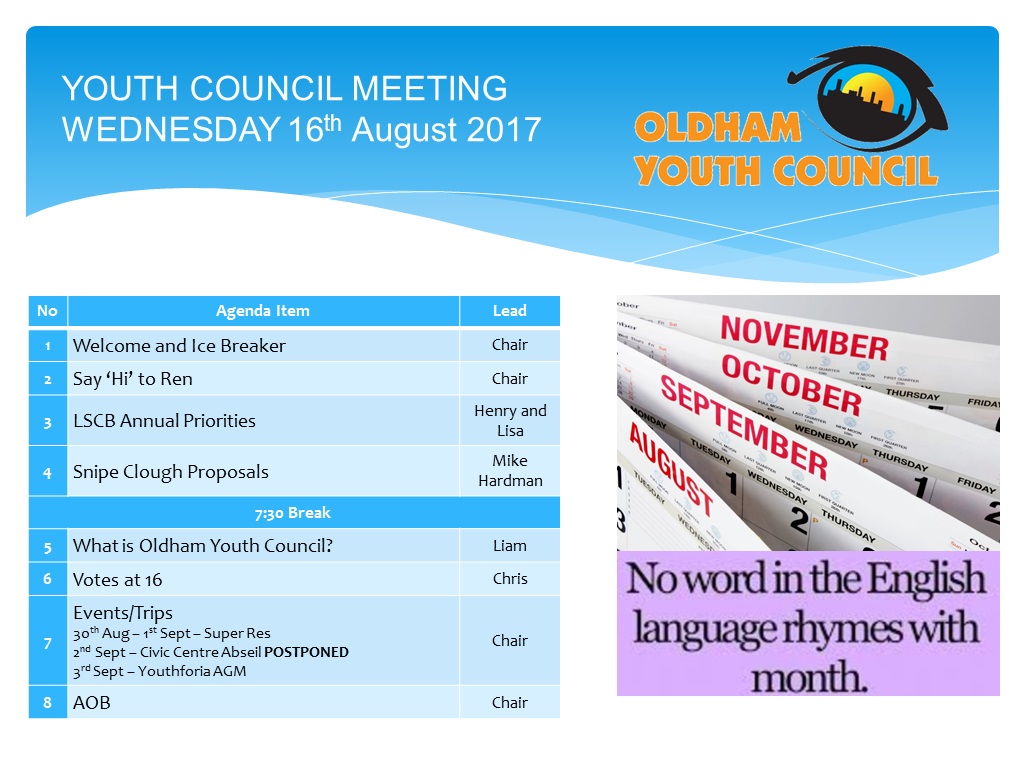 Ren from Youth Focus North West came into the meeting to introduce herself to the Oldham Youth Council. She wants to learn what it means to be a young people by touring the North West region, learning about what it likes to be a youth councillor or young person in Oldham.

The Oldham Local Safeguarding Children Board wanted to speak to the Youth Council to talk about their priorities and function. The LSCB has six functions; Policies and procedures, Communicate and raise awareness, Monitor and evaluate, Participate in commissioning of services, Child deaths information, and Serious case reviews. The priorities for LSCB are; missing from home, child sexual exploitation, complex safeguarding and e-safety, child missing from education, peer abuse, domestic abuse, transitions from children’s to adult services, early help (including the MASH). These priorities, set for 2017/2018, are to increase the safety and wellbeing for children in Oldham. The LSCB want support from the Youth Council with the following topics; Peer on peer abuse, Missing from Education, Voice of the child, LSCB website. An idea was brought up about task group(s) being set up for the priorities.

Mike Hardman asked for suggestions from the Youth Council about what a field, close to Alexander Park, could be used for. By using post-it notes, youth councillors wrote down what they wanted for that field. After having a discussion about some of the ideas given in, Mike gave out maps allowing youth councillors to see the land that is available. A task was set for youth councillors to place four flags in the area to show where certain activities could occur. The flags; Red – Sustainability Centre, Blue – Natural Play Area, Green – BMX/Mountain Bike Area, Yellow – Mixed Sports Facilities, White – This is to be decided by the group. Groups then fed back to Mike about where the facilities should be and their opinions on the facilities suggested.

WHAT IS OLDHAM YOUTH COUNCIL?

Liam asked the Youth Council to write down what is Oldham Youth Council? Including what we do and what we are? After gaining feedback, the general points that came up were; democratic voice for the young people in Oldham, tackles the biggest issues faced by the youth of Oldham, put motions to full Council to bring about direct action from the people that can make it happen, represent the young people of Oldham at events, consult with groups with young people.

Chris updated the Youth Council about the plan for the Private Members BillA bill that is won by Members of Parliament, which allows them to write a bill that has the possibility to pass through Parliament and become law. No.9 : Votes @ 16 bill. The Youth Council are creating films for a campaign for Votes @ 16, giving reasons for votes @ 16. Letters and emails are in the works to go out to Members of Parliament. Jess C., Samah K., Nathan R., Andrew S., Jake S., Alex R. have volunteered to co-ordinate the campaign.

Dates for your diaries and updates were given out to youth councillors.

Chris raised the issue about Members not handing in sponsor money connected to Oldham Way Challenge.
Liam mentioned about apologies, due to many youth councillors not handing in apologies when they are unable to attend the meeting.
Chris explained to the Youth Council about the carrying over process at the end of the term of office.