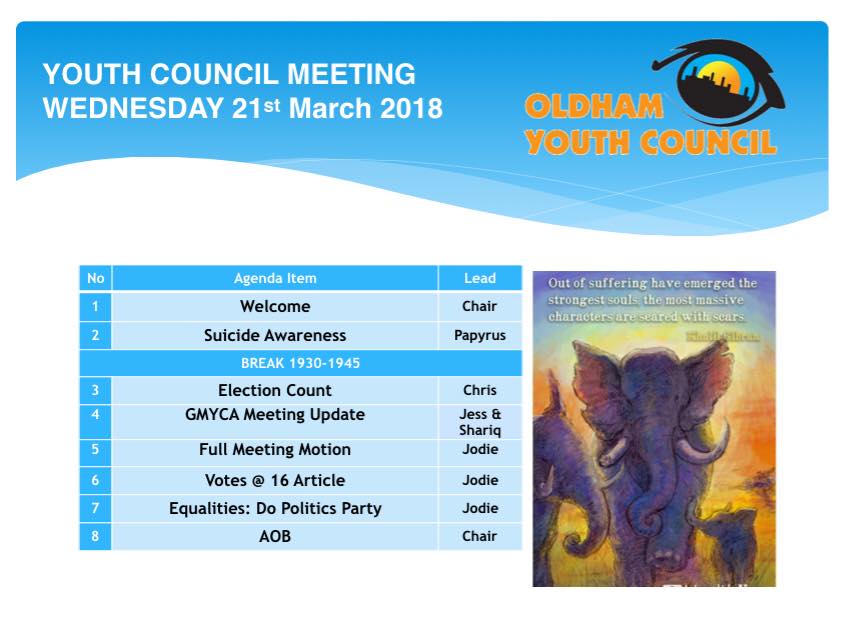 The meeting started with the Lightning Talks by Isabelle A. and Steff M.

Kelly Thorpe from Papyrus has come in to an OYC

Oldham Youth Council to talk about Stress, Suicide Awareness and Self Care. Papyrus is a charity that helps people who feel like suicide has become an option, helping the person with their mental health and helping them in their difficult time.

The session started out with learning what can cause young people to feel stress and pressure. A group discussion was instigated about what could cause stress, such as relationships, school life, exams, deadlines, trauma, the future, academic pressure, self pressure. After the discussion, Kelly gave examples in what the stress could affect, with behaviour, feelings, body/physical and thoughts.

After learning about different facts and having interesting discussions, Kelly ended the session with the idea of a hope box. A hope box is a box with things that you enjoy and and make you feel comfortable, so whenever you are stressed and need some self support, you can be surrounded by things you enjoy. Any information about Papyrus can be found on https://www.papyrus-uk.org/ .

Chris has set Monday 26th March after schools finish for Youth Councillors to come in and count the ballots for the 2018 Youth Council Elections.

The Full Meeting Motion on Smoking and Vaping has been finalised and Youth Councillors Shariq A. and Roshni P. are taking the motion on 28th March 2018.

Claire Fox has written an article on the reasons why Votes @ 16 should not be implemented into law, making arguments that have been seen as degrading, starting the argument off with a reference to Votes at 12. With collaborated ideas, a reply is going to be sent out on OYC’s behalf.

Oldham Youth Council up for a Tea and Cake event where we invite people in and get involved with politics.