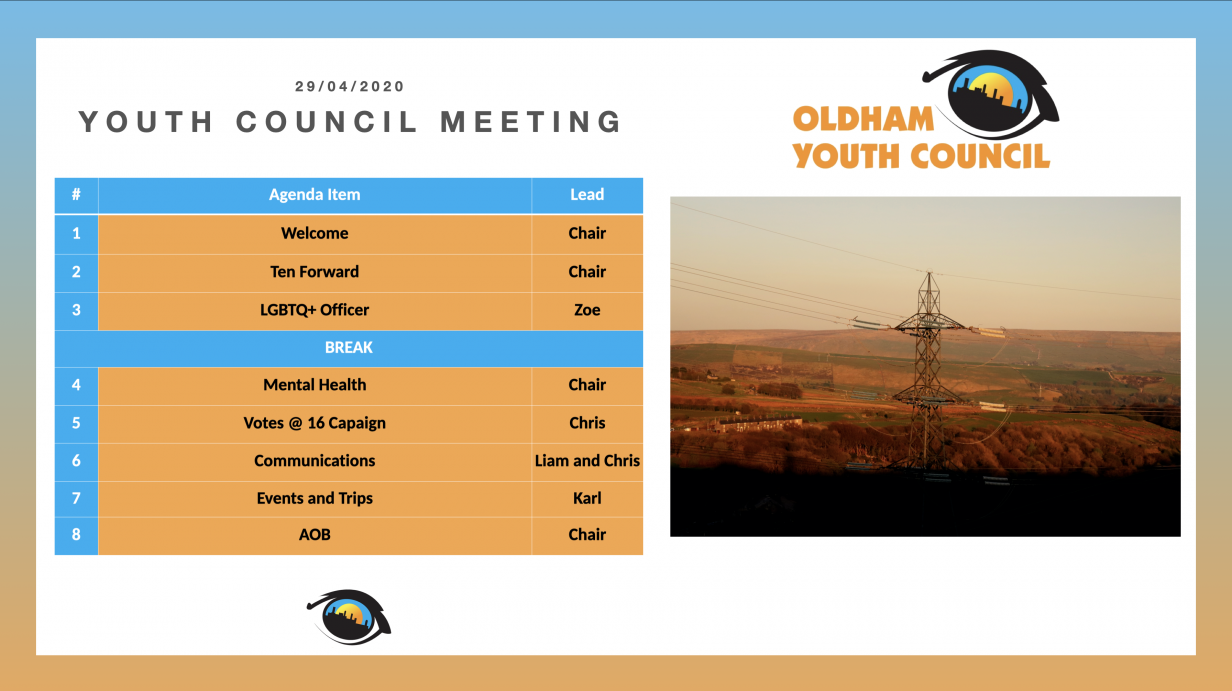 Oldham Youth Council More, we will still continue and engage with work surrounding other issues that affect young people, these can be seen within our manifesto. Youth Councillors were given the chance to feedback their findings.

The two questions for the ten forward surrounding discrimination were:

Common themes brought up in the discussion showed young people were varied within their experience of discrimination, highlighting different areas such as homophobia, race and religious discrimination, sexual orientation or they may have not experienced any form of discrimination. This also leads to differences in which young people had reported the incident, varying from telling family, friends, teachers, heads of years, or the young person not feeling as though they could tell anyone. It was also highlighted that third party reporting due to telling one of these figureheads did occur.

Through this feedback, a discussion was sparked around how OYC

Oldham Youth Council More should go around tackling the issue through the campaign, and it was asked upon Youth Councillors to come up with a theme for the campaign. Some discussion points that came up were:

Through these discussions, Chris mentioned the opportunity to invite Verbai from Oldham Council to come in to the next Youth Council meeting to discuss the differences between hate crime and discrimination. This was voted in favour by the youth council.

Zoe C. put forward the idea of including an LGBT+ Officer within our officer roles, and put a case forward on why this should be included within OYC

It was stated that if the role was to be introduced, it would be up to the elected member in the role to shape it how they see fit, as this is how the other officer roles were shaped.

After discussion, it came to a consensus to include the role put forward, but have it entered around inclusivity, with the main premise to ensure OYC

Oldham Youth Council More is being inclusive of many members of society through out its work. A vote went ahead, with 16 Votes For, 3 Votes Against and 4 Abstains. Therefore, OYC

Oldham Youth Council More will go ahead with having an Inclusivity Officer, and elections will take place at the next full Youth Council Meeting (13/05/20). Nomination deadline for the role is 12/05/20.

Following discussions taking place at the previous priorities meeting, Youth Councillors were asked to research different campaigns that were already being done around mental health. Examples were:

From this, Youth Councillors started discussing ways they could focus on mental health, with common themes of Men’s Mental Health, Awareness Raising, Looking at Missing Gaps and COVID-19 were highlighted. Through these discussions, the opportunity was put forward to invite a member of the CCG to a Youth Council meeting to discuss online support website Kooth.com – Youth Councillors voted for this opportunity.

Oldham Youth Council More came to a common consensus to look at how young people’s mental health will be effected by COVID-19.

Youth Councillors in attendance of the meeting were asked to vote on how they believed votes at sixteen should be implemented.

British Youth Council – A Youth Lead organisation representing 11-18 year olds across Great Britain. More are planning to relaunch their Votes @ 16 Campaign, rewording the campaign to centre around local elections being given the option to allow young people to vote in local elections. Oldham Council has previously passed a motion to full councilOYC have constitutional rights to ask Council to make changes in Oldham.  They do this formally by attending a full council meeting and putting a motion to full council. More on supporting Votes @ 16. The staple tag line to this campaign will be “The United Kingdom is not very united”.

Some Youth Councillors have been asked to write blog posts to go along with the relaunch of this campaign, which will be sent through the OYC

Liam gave an update on the monthly memo, a way to round up the work of OYC

Events and Trips were given out by Events Officer Karl.

Chris promoted the social media of Oldham’s Youth Mayor, as Youth Mayor Samah is raising money for the Oldham Covid Fund throughout Ramadan. For every £10 donated, cupcakes are being donated to front line staff. Head over to @Youth_Mayor on twitter, or @oldhamyouthmayor on Instagram for more information on how you can donate.

Stockport Youth Council are running a quiz to help raise money towards COVID-19 relief funds. Youth Councillors were asked if they wanted to get involved.