January 2018 saw the return of the Listen To The Earth project to Oświęcim, Poland. 10 Oldham Youth Councillors and 10 Oldham Theatre Workshop performers had the opportunity to walk around Auschwitz and Birkenau and really learn about the effect of the Holocaust. As previous trips, the aim of the project was to use Holocaust Education to enable young people to learn and develop sensitivity and understanding but more importantly to be role models for others in Oldham. All the quotes on this page are from members of the group, how they felt from each experience and what they learnt.

We embarked on the trip on the 19th of January, returning on the 24th whilst staying at the Centre for Dialogue and Prayer in Oświęcim, the town where Auschwitz and Birkenau were built and exist. There were a variety of creative workshops, such as creative writing and visual poetry, which used the knowledge and emotions the group felt in the camps.

Our trip consisted of four major events which allowed us to gain a deep understanding of what happened in the Holocaust; a tour around Birkenau, a tour around Auschwitz, meeting a survivor of the Birkenau camp and meeting a Righteous Gentile (a title awarded by Yad Vashim, the Jewish Council, to those who help Jews during World War II).

Saturday 20th January saw our journey to Auschwitz II (Birkenau). We walked the path that victims were forced to, from the original train stop to the camp.  Our amazing staff gave us an unofficial of the camp which made the experience  personal, and very emotional. The children’s barracks were the most emotional, as the group felt a clearer connection to those as they were of a similar age. After looking through the barracks, walking around the camp and learning harrowing facts, this is what some members of the group felt;

It is extremely hard to comprehend quite how big the camp was. We saw the exact place where the guards sent the prisoners either to their immediate death or to work in the camp. To think that the Nazis were planning to double the camp is a horrific and horrible thought. I left the camp feeling empty.

The tour of Birkenau left me speechless and emotionless. Learning about the horrific actions that occurred behind the four barbed wire gates left me speechless, wondering how anyone could be so cruel as to destroy so many innocent souls, innocent men, women, and especially children.

On the day we went to Birkenau I felt angry, I was upset and I didn’t know how to process it. I was hurt by it and didn’t understand how evil a person could be.

After visiting Birkenau, on Monday 22nd, the group took a trip to Auschwitz I, where the original plans took place. This tour was with an official tour guide who showed us around the different expeditions such as the suitcases, the hair shaven from the victims, cutlery and shoes.  We were also lucky enough to get a chance to see works of art produced by prisoners of the camp for the Nazi’s to document what was going on.  It was amazing to see that even in times of such horror, prisoners would steal art supplies to create small pieces of art for themselves and other prisoners.  Maybe this was a way to keep their identity when captors were trying to reduce them to a number.

When we went to Auschwitz I, I didn’t cry until the gas chambers, it didn’t hit me as much as Birkenau did and again I really didn’t know how to process it and it took me a few days for it not to be at the front of my mind constantly.

After visiting Auschwitz and Birkenau, I came home with a different perspective. I am now trying to be grateful for what I receive as it is unfair for us to complain about our lives and what we do or don’t receive.

We always hear stories of atrocities on the news now, it’s essentially just routine. We’ve become numb to words on a page to the point where it’s just devoid of real meaning.
Visiting Auschwitz has given me a new perspective on these events beyond words on a page as well as strengthening relationships both with people I’d known for years and people I’d just met.

I was horrified to stand in a room filled with women’s hair, children’s suitcases and clothing. It took me a while to understand the nature of what I was seeing. The guard towers and the electric fences made it seem all too real that there was no escape.

In an act of remembrance, the group decorated stones, using words or imagery to represent the project, themselves and to remember the victims of the horrible mass genocide. The group had decided they would want their remembrance stones to be placed near to the “Death Wall” next to block 11.  The reason was to remember those who were lined up against the wall and faced the firing squads, including a baby who had been only a few months old. These are the stone the group decorated, in remembrance of those who were sadly affected by the Holocaust.

The group had the opportunity to listen to the story of a survivor. Lidia Maksymowicz was only a child when she was child and kept in Auschwitz II – Birkenau.  Lidia suffered through unimaginable conditions, including hunger and freezing weather. Her story added to the detail and emotion to what we had experienced visiting the camps, allowing the group more insight and more knowledge. After her story was told, the group came up with intriguing questions, letting their minds have the knowledge it wants, to understand what she really went through.

Speaking to the survivor was really interesting. The info that she knew was amazing and it give me more information to what actually went on and it was interesting to hear about what happened from a survivors point of view considering she was only quite young when it happened.

The survivor was so young when she was sent to the camps and endured so much whilst she was there, I have the upmost respect for her.

Meeting a survivor was incredibly inspiring and although she had been through so much torture, mentally and physically, she still managed to put a smile on her face and glow. She is a positive and an aspiring woman and I will forever look up to her as a role model.

Mirosława Gruszczyńska is recognised as a “Righteous” due to the risks she took by helping the Jews in the Holocaust. Miroslawa and her family hid a young Jewish girl from the Nazi’s putting themselves in danger of being sent to the camps or even being shot.  These risks were recognised and she was awarded a medal in her name, a certificate of honour and had the privilege of having her name added to those on the Wall of Honour in the Garden of the Righteous at Vad Yashem (the Jewish Council). The group had the chance to listen to her story, the story of her mother agreeing to look after a Jewish child, about the risks they took but how Miroslawa helped save a life of an innocent human being.

Listening to the story of Miroslawa gave hope behind all of the suffering, brought back the thought in my mind that there is always good no matter how much evil.

The living righteous was so strong and so willing to help people if it meant putting herself at risk, it made me realise what a tough time it was. The group with Mirosława Gruszczyńska

We hope that education about the Holocaust will be spread worldwide, allowing everyone to understand the colossal impact narrow-mindedness can be. Every person in the world needs to know that we are all citizens of this world, and need to respect everyone’s human rights, and that peace shouldn’t be a local thing, it should be a global standard.

Throughout this journey, the young people used creative means on expressing how they felt, what they learnt and what they interpreted. Workshops such as Creative Writing, Visual Poetry and Devising a Theatre piece were held to allow this to happen, and all the work the young people did will go towards AQA accreditation through their unit award scheme. 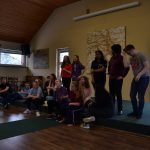 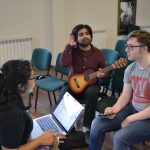 A small song being made to go along with the preformance… 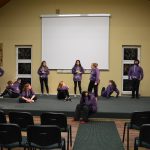 The preformance in action.